A bit of variety.

In this modern age of photography you here more and more that one has to specialize in order to be successful.  This may be true in some cases and when I was running my studio I did just that.  Portraiture was my specialty and I was pretty good at it.  However after 15 years doing this I became a little tired and choose to cut back.  This did not mean I stopped shooting, as those of you who follow my writ tings and  photo's can attest, but just changed directions.

I have rediscovered the joy of just taking photo's for myself and what I want.  These last four days show some of the variety of subjects found to create my photo of the day.

October 8.  Luke had pulled out this old alphabet puzzle and had left it sitting in the middle of the basement.  I was attracted by the colours and the letters and turned the iPhone on it.  Some post work in Snapseed gave it a little pop. 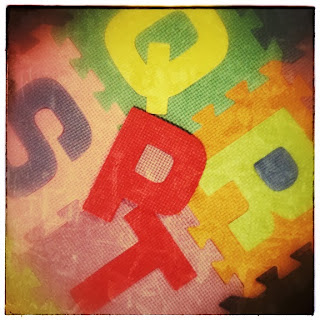 October 9.  A portrait of Breanna from my basic lighting class SHe has been coming into model for my classes at SAIT for about nine years now and is always lovely to work with.  She had a new haircut on this evening and I wanted to play with the hair over one eye to give a sense of mystery. 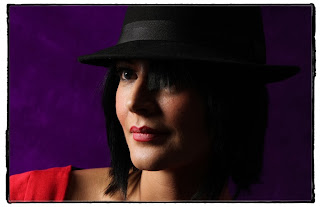 October 10.  My second walk this week.  This time with my class from the Greater Forest Lawn Seniors Center.  We went to the Inglewood but found that it was still closed due to the flooding this past June. So we went for a hike along the bike path that runs between the sanctuary and the rail lines.  This interesting engine appeared on the tracks and I felt it would ake an interesting image as I had never seen a shuttle wagon before.  Shot on the Canon 7D but post processed with Snapseed on the iPhone.

The rain then started that afternoon and when I was on my way to SAIT for my evening class I saw this lone leaf stuck to my windshield.  A quick snap with the iPhone made for an interesting shot. 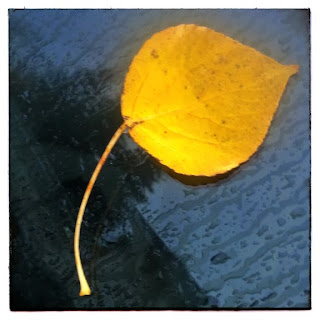 October 11.  I noticed that the moon had risen early this evening and was very visible against the blue sky.  I have seen a lot of photo's of the moon taken at night, but thought this might be a little different.  I shot this at 200 ISO, 1/800 sec, f5.6 on the Canon 7D with a 2X converter on my 70-200 lens.  It is cropped in and frames but no other post work was done. 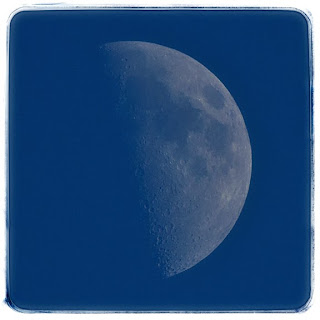 Posted by Patrick Kornak at 9:32 PM No comments:

This quaint Australian term brings visions of grand adventures and discovering new places and things.  However it is also a good idea for those of us who only need a few hours and a chance to rediscover what is around of.  These past two day's I had the opportunity to take sometime and take some short walks.  Here are the results of my walkabouts.

October 6.  I took a walk with Cool in Baker park as he searched for leaves for a school project.  While he did this I was watching for opportunities for photographs.  The graffiti inside one of the storm sewers and the fall colours caught the majority of my attention.  However I did notice a bike rack as well and experimented with the Hipstamatic app for the last photo in this series. 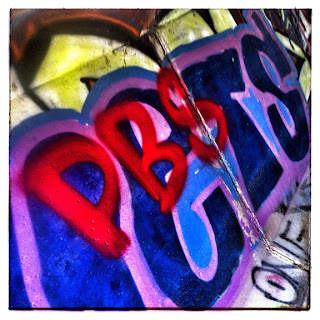 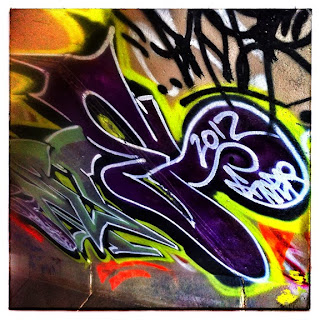 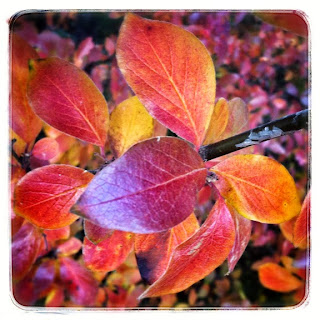 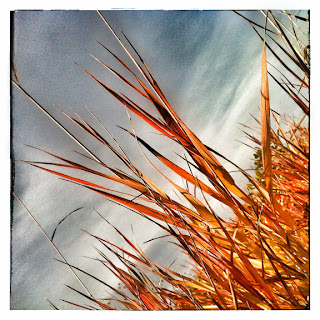 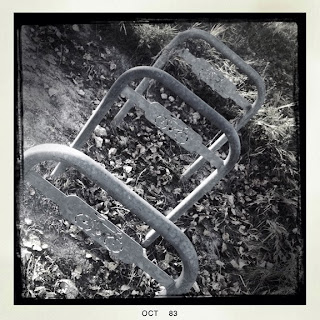 October 7.  Today's walk was part of my class I am teaching at the Kerby Center.  I took a group of ten seniors out for a walk down by the Bow River down to the Peace Bridge and back.  Along the way I answered questions they had about their cameras but also showed them how I see and observe the world around me.  There were many objects of art that have been commissioned and as these were new to me it is where I focused on.  All these  images were shot with the Canon 7D except for the last which was done with the iPhone. 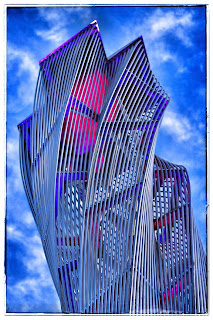 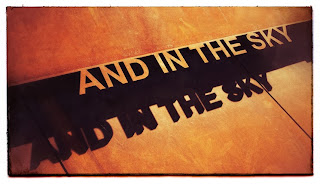 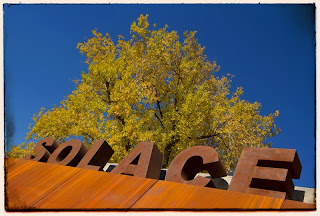 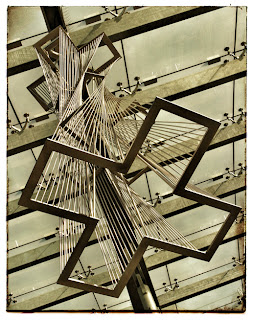 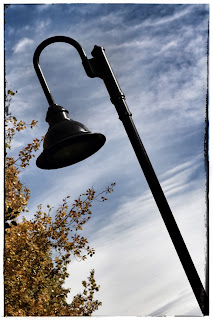 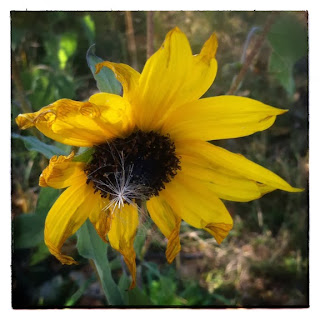 Posted by Patrick Kornak at 10:04 PM No comments:

When I started this project on December 31, 2010 I had only intended to see if I could follow through on a photo a day for a year.  Now I find myself reaching my 1000 consecutive day with today's post and feel it is a good chance to look back at what I have learned.

Lesson 1.  No matter what don't throw in the towel.  There were nights as the clock ticked down where I was tired and not feeling creative.  Still I reached deep down and found some item, some knickknack laying around the house and found some creative way to photograph it.  It surprised me that some of these images were my most popular shots.

Lesson 2.  Use the project to try new things.  In 2012 I concentrated on learning what the camera in the iPhone can do and what apps worked best for my vision.  All but two of the 366 photo's of the day were created with the iPhone and I learned when it works well and has an advantage as well as it's shortcomings and when it was not reliable.  I found Snapseed to be my favorite app with iPhoto, Hipstamatic, Jazz and RealCamera+ to be useful.  I tried many others and use a few of them, but many have been removed from my phone as they did not suit my taste.

Lesson 3.  Keep your eyes open and observe the light.  Many times during a busy day I found it challenging to think about taking photo's.  However this did not mean I stopped seeing scenes around me.  This has helped me be ready to capture a shot, even if the moment was fleeting.

Lesson 4.  Don't worry if other's look at you strangely.  Many times I would pull out my camera (iPhone or DSLR) at times and places where others might have walked past.  Often people would look at me with quizzical looks as I shot in places like Safeway and Walmart or found me contorting myself or at odd angels trying to frame a shot.  It does not matter what they were thinking, I was able to get the shot I wanted.

Lesson 5.  Share over and over.  Whether it was through this blog, on Facebook, Twitter, Goggle+ and LinkedIn or the photo social sites like Instagram, Pheed, Tadaa, Mobli, EyeEm Tuding, Streamzoo and now Pressgram it was good to get my daily images out to the world.  One does not need to have a lot of follower nor to be following a lot,  just be active in that community.  You can get feedback from all over the planet and gain inspiration from them.

These are just a few of my thoughts and now as I continue to move forward I hope to continue to grow as a photographer and as a person.  I look forward to sharing more photo of the day with you as well as incorporating some projects in to it as well.  Here are my photo's from the past few days.

October 2.  Walking through Safeway I noticed this basket with mini pumpkins in it.  I quickly took out my iPhone and snapped a couple of frames.  I used Snapseed for most of the port work but removed one white label using iPhoto. 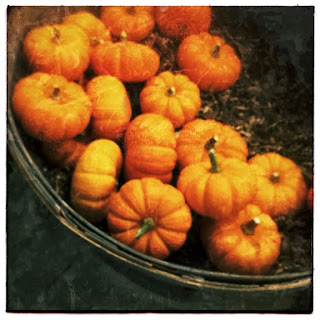 October 3.  Finishing the night after teaching at SAIT I found these two objects.  The first was a bottle of Windex siting on a shelf in the darkroom (they still have a B&W lab and a strong continuing ed class in the school).  A quick shot and a bot of Snapseed created this photo. 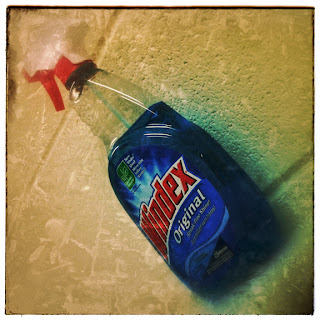 Walking out to my car I passed the bins for garbage and recycling and the symmetry of this shot caught my eye.  I positioned my camera to get this lovely perspective as well as the reflection of the lights off the silver.  Again a little work in Snapseed achieved what I was looking for. 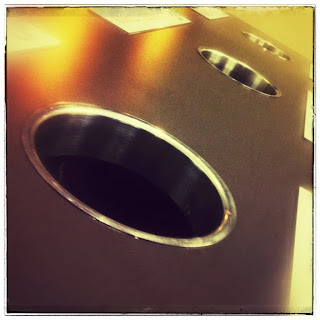 October 4.  A day with my boy's as it was a PD day from school. Cool had to go and collect some leaves for a school project.  While crossing the bridge at Edworthy Park I saw this shadow and asked hime to lay down in the sun.  I shot this with the iPhone but did a bit of post work in both Snapseed and in Photoshop on the computer. 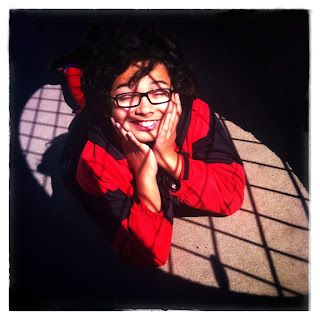 Later that afternoon we went to see Cloudy with a Chance of Meatballs 2.  After words Cool and Luke wanted a photo with the snowman from Frozen which is the next movie they want to see. 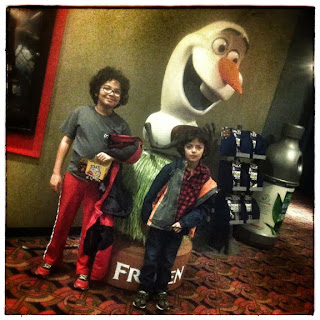 October 5.  While Cool and I were out collecting bottles for his choir fundraiser I found today's images.  The first was a boat sitting in a driveway waiting to be winterized.  I held the camera high and angled it to get the view I wanted. 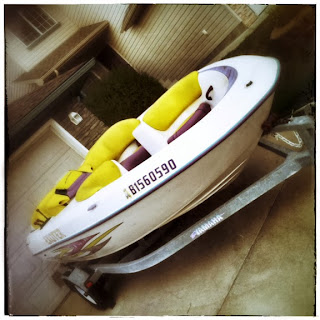 We latter came across this huge metal butterfly on the side of one of the houses.  I asked the owner if I could snap a shot as I found it interesting.  A little work in Snapseed with the drama filter made it pop. 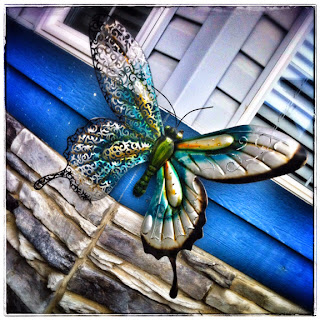 Posted by Patrick Kornak at 9:19 PM No comments:

For business today would be the start of the 4th quarter.  For me it is the home stretch on the way to the end of the year and another successful completion of the photo a day challenge.  Life does have away of keeping one busy so sometimes I just have to get the images as they present themselves to me.  Here are My photo's from the last four days.

September 28.  I had to drive Luke out to choir camp for the day (Cool was already there and would be for the weekend) and since it was outside of the city I figured I would take my camera and try and take some photo's on my way back into town.  The morning was very overcast and not to conducive to nice landscape images.  Still I kept my eye's open for any opportunities that might occur.  Thus it led me to this photo as I had noticed the reflections in some of the ponds on the edge of the highway.  Once it was safe to stop I found a place to park my car and walked over to the water. Fortunately the sun decided to make a quick appearance and completed this composition. 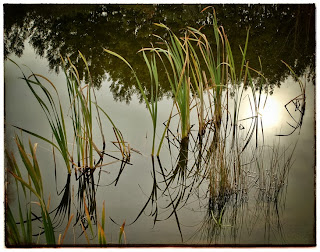 September 29.  The boy's had a long day with the completion of choir retreat and and some other running around that I felt they deserved pizza for supper.  While waiting I shot this quick iPhone shot of the Caesar Dips display and made it jump using snapseed.  Sometimes everyday items can make for interesting photos. 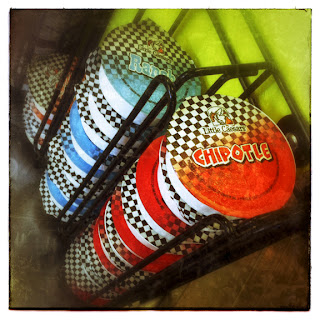 September 30.  Taking a walk around St. Stephen's Anglican church looking for my photo's I came across these two scenes.  The shine off the pipes and the angles caught my attention and I captured this image. 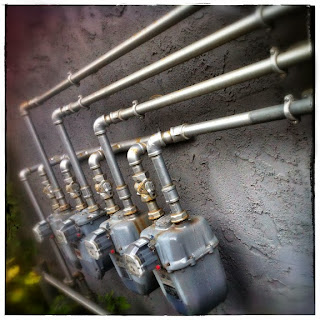 Back inside the church I noticed that the stained glass windows looked especially strong as the sun was coming in from the right angle and the room was dark due to the renovations. 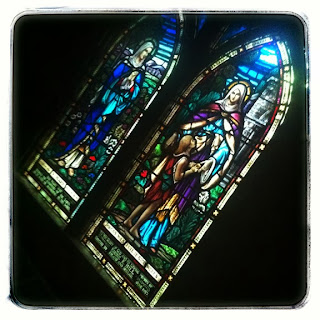 October 1.  While I was waiting at the school this afternoon I noticed this one houses flowers were hanging on despite the cooler fall temperatures.  Their was still some beauty left in them even thought they were starting to fade. 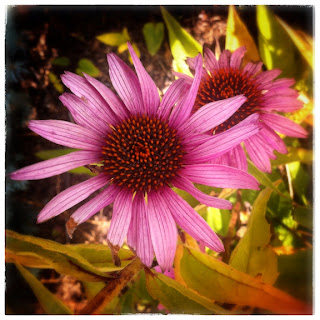 Posted by Patrick Kornak at 7:51 PM No comments: