The circle of life.

As I walked around the house today looking for a subject for my daily photo I came across a number of things involving the plants that we have.  I took the first photo of the only remnants of our sunflowers as some critter decided to make a snack of them just after they started to flower.  This lone head was all that was left after either the rabbits or squirrels got at them.  I took it's photo and continued my walk in the yard. 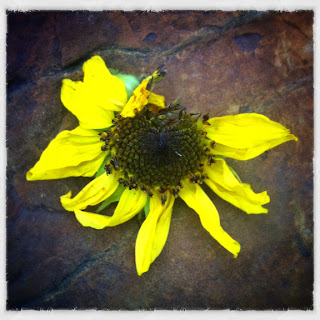 In the backyard we discovered one of our newly planted berry bushes was completely destroyed with nothing but roots left.  I then found this poor mushroom that had been partially eaten. 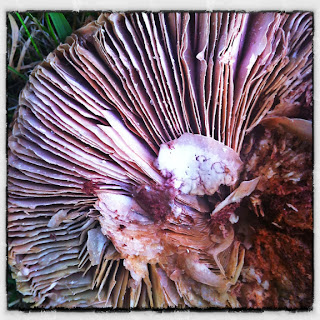 When I cam back inside the house and sat by the window to work on my earlier images I notice that a couple of the blooms had fallen off our Jasmine plant. 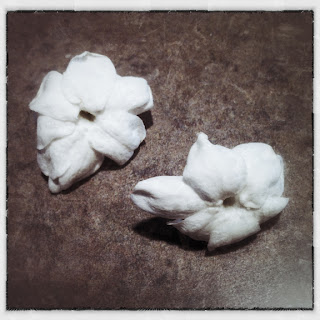 All of these made for interesting subjects and as I worked on the images in Snapseed I found that I had a bit of a theme going on today.  The Elton John song from the Lion King came to mind as I felt that these three images were got representations of the "Circle of Life".  Even in their withered states each still had it's own beauty and dignity.

The Sunflower photo at the start is my entry for today's Instagram 366 project.
Posted by Patrick Kornak at 9:22 PM No comments:

Playing the catch up game.

I have been negligent in posting once again, so today's post is a catch up on the last 10 days of images.  Enjoy.

July 13, 2012.  Some how this silly little concept popped into my head as I was reading various posts about photographers and how they "shoot" people on Facebook.  I thought it would be funny to do a police line up shot of a variety of suspects.  I entitled this one "Can you choose the culprit who shot you?" and took the photo with my Canon 40D (the 7D and iPhone were under suspension) processed it in photoshop and then used the RealCamera+ app on the iPhone to add the frame.
July 12, 2012.  The setting sun cast a beautiful light on the clouds and I made a quick trip across the street to shot them with the iPhone.  I framed it with the trees as I felt it would be boring with out another element to the photograph. 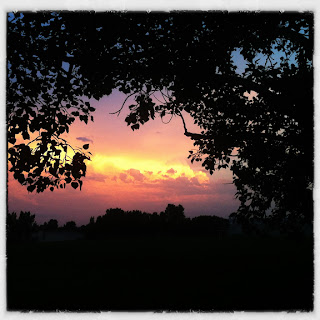 July 11, 2012.  Was running a quick errand and as I was walking back to the car after dropping of an envelope of disks to one of the subjects for my lighting class at SAIT I noticed these rather large flowers.  I managed one quick shot and then went about my chores.  When I got home I was able to do a little post processing in Snapseed, but it is relatively as captures. 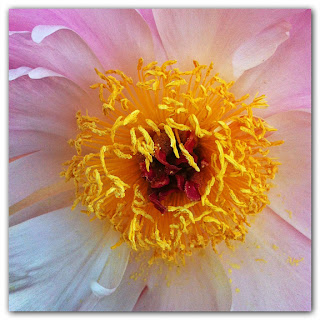 July 10, 2012.  Was going for a walk in the evening on the pathways that run behind the houses in Dalhousie.  I was trying a variety of things with some of the new packs that Hipstamatic recently released as snapping photo's of things of interest.  I shot this fire hydrant with the US1776 Film and the Roboto Glitter Lens.  It gave the yellow on the hydrant a glow and then I finished off using a tone and frame found in Streamzoo. 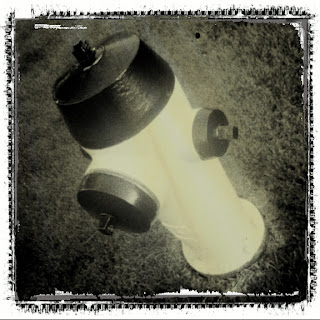 July 9, 2012. The hottest day of the year so far and the family and I spent the morning down at the Calgary Stampede Grounds.  The following is a selection of images from the day.

The Kids zone with the children's Ferris wheel.  Processed with the earlybird filter in Instagram. 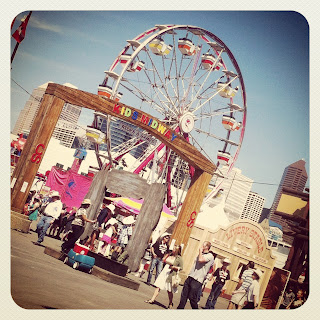 After taking the family home and attending a class at SAIT I decided to head back to the grounds for some night shots.  I took the following two images of this neon sign on my walk to the Stampede.  Later when I was processing the image in Snapseed I finished the colour version then after saving it thought what would it be like in Black & White.  The second is the result and I like the results a lot. 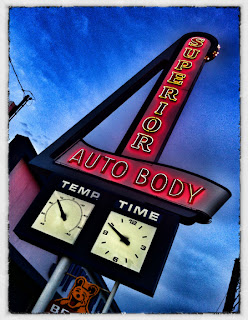 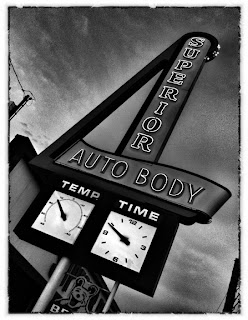 On the grounds I shot the following images with the iPhone (I also shot with the Canon 7D for some longer exposures).  The top one was my Photo of the Day for my Instagram 366 project.  I felt it was one of the nicest captures out of the series that I tried getting a little movement but also framing the riders nicely in the sky at dusk.  Processed and finished in Snapseed. 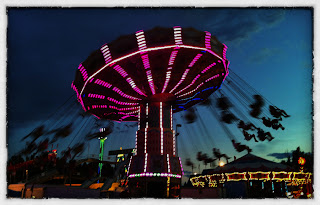 There was a little motion in the capture with the iPhone which is what I was going for.  I do have some others with the 7D that have much more. 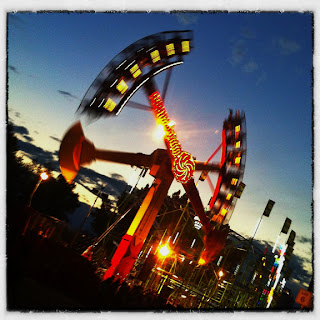 The Ferris Wheel at night and a nice capture with the iPhone. 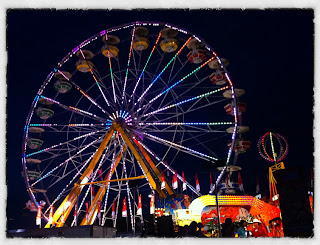 July 8, 2012.  Spent the day working on the redesign of my web-site.  I am liking how it is coming along but it is still a little ways away before it is ready to be uploaded.  I grabbed a shot of the screen for my Instagram 366 photo. 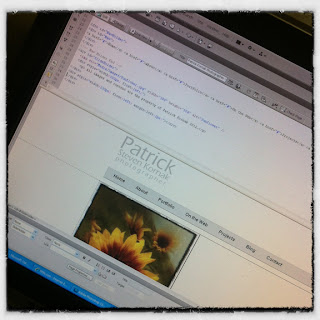 July 7, 2012.  Larry and Joanne where our subjects for the Wedding Photography class that I teach at SAIT.  I took this quick iPhone shot of them and their reflections for my photo of the day. 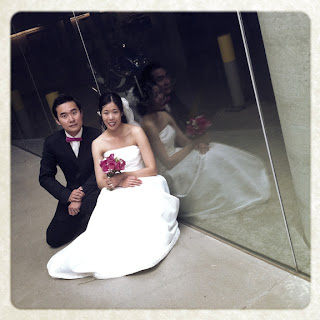 July 6, 2012.  We had a vicious hail storm roll through and I thought to make this photo of the destruction of our Pansies as the photo of the day. 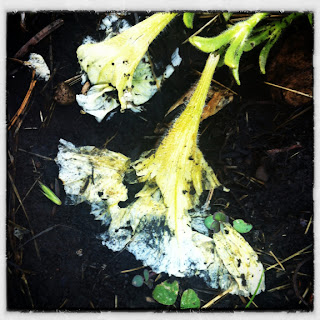 However I still wanted to make a capture of one of the flowers that did survive and was playing with it in a new app I discovered called JAZZ.  It basically rotates an image randomly through a variety of looks and presents you with four options.  As you go through you can choose and save the looks you like and I liked these four.  I then used the Frametastic app to make the final presentation as seen below. 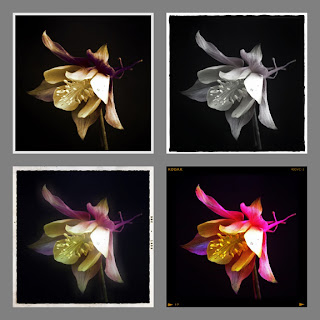 July 5, 2012.  Sneak a peak at the Calgary Stampede and the family and I went down to take it in.  On our way home I saw this great sunset with the Calgary tower in silhouette.  My Instagram 266 image for the day. 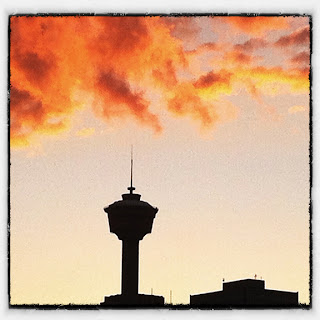 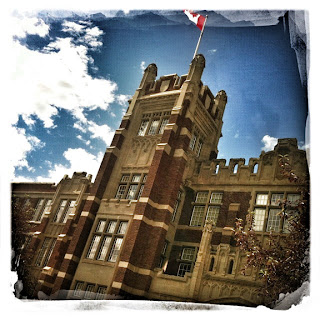 July 3, 2012.  A bike at the playground while Cool played soccer became my subject on this day. 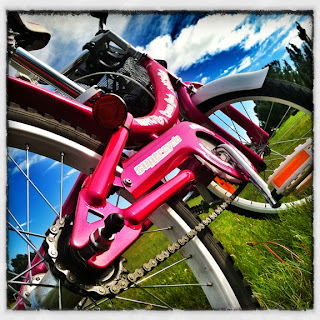 Posted by Patrick Kornak at 10:13 PM No comments:

So today is officially the mid way point for 2012, Day 183.  Staying on target for a n image a day for 366 days can be a challenge and more so when one is limited to locations.  As I looked at this posting I see that once again flowers dominate the theme and yet I like each image and find they are unique in their own way.  So I hope you like the following images and thanks for following me as I continue this journey.

July 2, 2012.  Two photo's for today.  The first was taken from behind the flower with the sun shining through it. There was some flare which I cropped out using Snapseed.  This is my official image for today's Instagram 366 photo.

However I also liked this photo I took using the Hipstamatic app as I wanted to record this Sunflower plant before it bloomed in Black and White. 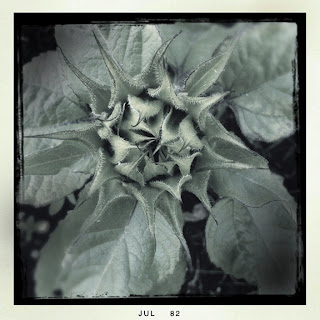 July 1, 2012.  Close up off a Red Lily using the iPhone.  Minimal post processing in Snapseed. 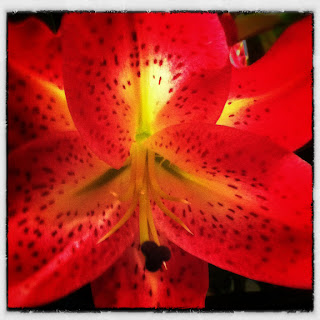 June 30, 2012.  This pine cone had broken of the tree and landed on our deck.  I liked the green in the cone as usually you see them all dried out. 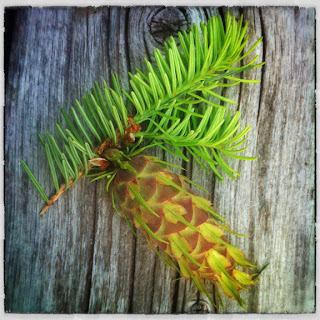 June 29, 2012.  At a friend's house who has the entire front yard as a flower garden.  Needlessly to say there were plenty of bees around and thus one ignored me as it gathered the pollen off each stamen. 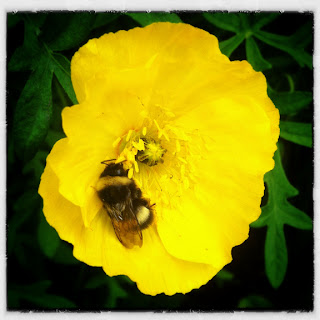 June 28, 2012. Found this unique flower pot in the Iris Eye store in Market Mall.  Did a quick snap and did some post processing with Snapseed. 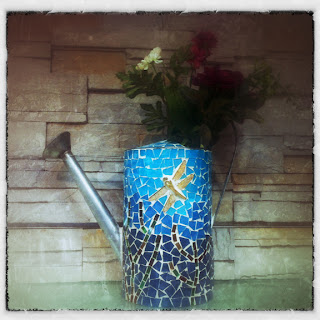 Posted by Patrick Kornak at 10:09 PM No comments: